WindSync is a collective of five outstanding North American wind musicians who come together as performers, educators, and community-builders.  WindSync concerts are intimate, joyful, and thoughtfully programmed with people and places in mind. The quintet eliminates the “fourth wall” by performing from memory, connecting quickly and memorably with audiences.

Recent winners of the Concert Artists Guild and Fischoff competitions, they approach their mixed repertory of wind quintets and arrangements with the highest level of artistic dedication.

WindSync has appeared in recital at the Met Museum, Schubert Club, Shanghai Oriental Arts Center, and Weill Recital Hall at Carnegie Hall.In 2015, WindSync was invited by the Library of Congress to perform the world premiere of Paul Lansky’s “The Long and the Short of it”, commissioned by the Carolyn Royall Just Fund and the Chamber Music Society of Lincoln Center.

Their 2018-2019 season includes performances at the New School, Ravinia, and the Hobby Center, and premieres by composers Ivan Trevino, John Steinmetz, and Marc Mellits. 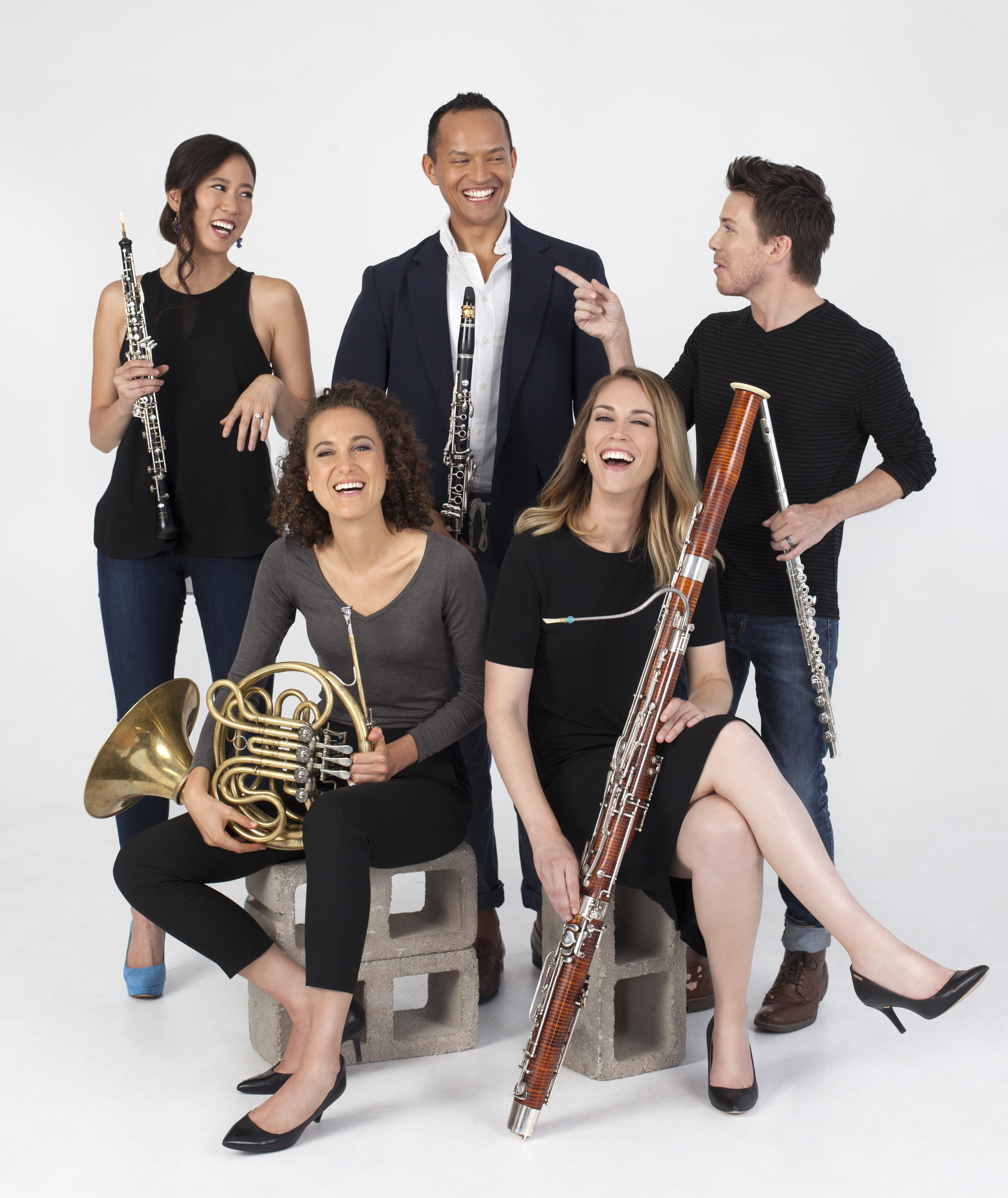 Garrett Hudson, flute
Recognized by the Winnipeg Free Press for “shaking up the classical music world”, Garrett Hudson is known for his charismatic stage presence and highly personal voice on the flute.  The young Canadian’s roots lie in Winnipeg, Manitoba where he emerged at the age of 16 in a solo debut with the Winnipeg Symphony. Before embarking upon a dynamic career as an international soloist, instructor, orchestral and chamber musician, Garrett held positions in North America’s leading professional training orchestras including the National Academy Orchestra of Canada and l’Orchestre de la Francophonie in Montreal, Quebec and participated in other world-class training programs such as the Young Artists Program through Ottawa’s National Arts Center. Garrett completed a Bachelor of Music degree from the University of British Columbia, studying under Scottish flutist Lorna McGhee and earned his Masters of Music degree from Rice University’s Shepherd School of Music under the tutelage of renowned flute pedagogue Leone Buyse.  Since 2009 Garrett has served as flutist with WindSync, an ensemble considered to be one of North America’s foremost emerging chamber forces and a recent Gold Medalist in the National Fischoff Chamber Music Competition and winner of the Concert Artists Guild international competition for artist management.

Emily Tsai, oboe
Quoted by DMV Classical as having “a consistently lovely tone and [taking] her melodic twists and turns with stylish assurance,” Emily Tsai began her musical studies at the age of four on the violin and started the oboe when she was ten. She won 2nd place in the Eastman Oboe and University of Maryland Concerto Competitions where she performed with the University of Maryland Symphony Orchestra with added dance choreography.  Based in the Washington, DC area, she is an active freelancer performing with the National Philharmonic, Amadeus Orchestra, Allentown Symphony Orchestra, Alexandria Symphony, Arlington Symphony and the McLean Symphony Orchestra. In past summers, Emily has attended the AIMs Festival in Austria, Mortizburg Music Festival in Germany, Alba Music Festival in Italy, Sarasota Music Festival, and many others, where she studied under such prominent oboists as Neil Black, Allan Vogel, Nancy King, Richard Killmer, Werner Herbers, Randall Ellis, John Ferillo, and Robert Sheena. Her main teachers include Mark Hill, Richard Killmer, and Malcolm Smith. She received her Bachelor of Music degree in Oboe Performance from the Eastman School of Music with a Performer’s Certificate and the Chamber Music Award, and her Bachelor of Science degree in Ecology and Evolutionary Biology from the University of Rochester graduating Magna Cum Laude.  She received her Master of Music from the University of Maryland where she was part of the Graduate Fellowship Quintet, SIREN.

Julian Hernandez, clarinet
Julian enjoys numerous solo, chamber, and orchestral engagements across the U.S. and abroad. He most recently served as principal clarinetist of the Fayetteville Symphony from 2014-2016 and performs regularly with the Charleston Symphony (SC). He has performed with the Lansing Symphony, Waco Symphony, Mid-Texas Symphony, and the Akropolis Reed Quintet. Festival appearances include: New York String Orchestra Seminar (NYSOS), Youth Orchestra of the Americas (YOA), and Texas Music Festivals. He is a graduate of the Youth Orchestra of the Americas’ Global Leaders Training program that aims to build social music programs in the most remote and dynamic parts of the world. Through Global Leaders, Julian has had the privilege to present masterclasses and build educational residences in the Dominican Republic, Haiti, Jamaica, and Suriname’s Nationale Volksmuziekschool. Stateside during the summers, Julian is on faculty at the PRIZM Music Camp and International Chamber Music Festival in Memphis, TN. When not obsessing over chamber music, Julian can be found teaching indoor spin classes or binging on Netflix TV shows.  Julian attended Baylor University, the University of Michigan, and the Eastman School of Music. His primary teachers include: Dr. Richard Shanley, Alan Olson, Dan Gilbert, and Kenneth Grant.

Kara LaMoure, bassoon
Originally from Dallas, Texas, Kara LaMoure is a chamber music addict, performing regularly as a founding member of the Breaking Winds Bassoon Quartet and having recently been on the roster of the Missouri Quintet, Odyssey Chamber Music Series (Columbia MO), and Chamber Project St. Louis. She also takes special interest in global youth orchestra movements and has served as a coach for youth orchestras in Switzerland, Honduras, Mexico, and Brazil. As an orchestral musician, Kara performed previously with the New Zealand Symphony Orchestra and the Civic Orchestra of Chicago, and she can be heard on the original soundtrack to The Hobbit: The Desolation of Smaug. Between performances, she can probably be found working on new creative projects or listening to podcasts.

Anni Hochhalter, horn
Born in California and raised in Las Vegas, Nevada, Anni is an active musician and innovator in the arts field.  Specializing in chamber music, she has launched an exciting career as a recitalist, instructor, and social entrepreneur. Anni graduated from the University of Southern California with a Bachelor of Music degree in French horn performance studying with leading studio and orchestral musicians, Rick Todd, James Thatcher and Kristy Morrell along with summers under Roger Kaza as a fellow at the Chautauqua Music Festival and Texas Music Festival.  In 2009, Anni won first prize in the Yen Liang Young Artist Competition and performed Richard Strauss’ First Horn Concerto in E-flat Major with the Diablo Symphony. As a touring musician, she has performed with orchestras and chamber ensembles across North America, Europe and Asia and performs each summer as principal horn of the McCall Music Festival in McCall, ID. Anni is based in Washington, DC and currently serves as Executive Director and musician chair of WindSync.

Ivan Trevino (b.1983) is a Mexican-American composer and percussionist who has become a recognizable voice in the percussion community. His honest blend of contemporary, percussive and indie-rock compositions have become standard repertoire in the field of percussion and are regularly performed around the world. He is a multi-award winning recipient of the Percussive Arts Society’s International Composition Contest and has over 70 compositions and songs to his name, many of which were commissioned by leading performers and institutions in the field.

Ivan is well-known for his work as a drummer and composer with Break of Reality, an international touring cello and percussion quartet. As a founding member of the ensemble, Ivan has headlined concerts across North America, South America, and Asia and was named a music ambassador by the U.S. State Department during the Obama administration. His work with Break of Reality has been heard on PBS, Huffington Post, Yahoo Music and is on regular rotation on NPR.

In addition to composing and performing, Ivan is an active educator who has presented educational clinics at hundreds of institutions around the world. He has designed and taught courses at Eastman School of Music and was most recently a faculty member at Baylor University’s School of Music. He is currently an artist and clinician for Vic Firth, Malletech Instruments, Zildjian Cymbals, Evans Drumheads, and Meinl Percussion.

In 2017, Ivan co-founded The Big Trouble alongside composer and percussionist, Drew Worden. The percussion / songwriting collective received a Boston Foundation Artist Grant in 2017, produced and released their self-titled debut album, and was a featured performing ensemble at the 2018 Percussive Arts Society International Convention.

Ivan’s work spans various media including storytelling, poetry, and film scoring. He recently authored Space Junk, a children’s story accompanied by music, with an illustrated book set to release in 2018. His collection of online writings are regularly circulated throughout the arts community, including “My Pretend Music School”, a blog post that sparked debate about music school curriculum and has become required reading for collegiate courses around the U.S.

Ivan received a BM and MM from Eastman School of Music where he studied with John Beck and Michael Burritt. He currently resides in Austin, TX with his wife, Amanda, and their son, Henry. 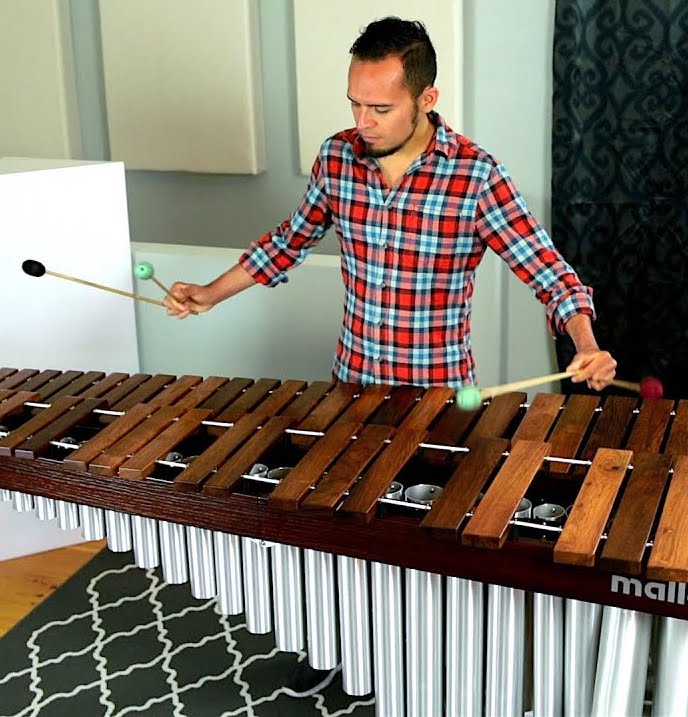