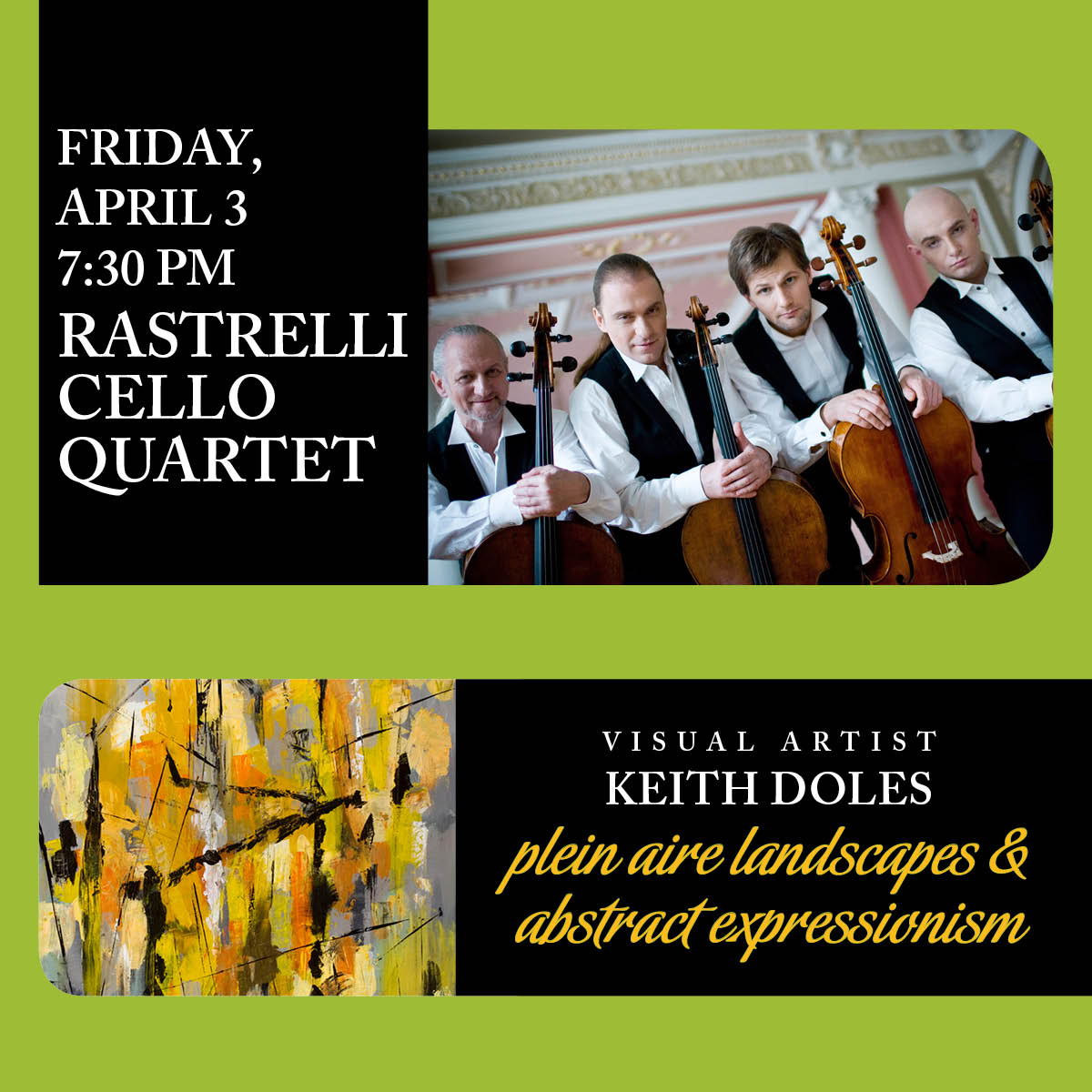 A singularly unique ensemble, the Rastrelli Cello Quartet has been thrilling audiences with its renderings of non-traditional programming since 2002 with a mission to perform music “between the genres,” and its widely varied programs mix comfortably with works by Bach, Saint-Saens and Tchaikovsky, and with that of George Gershwin, Dave Brubeck and Leroy Anderson.

The quartet has performed in many of Europe’s great concert halls, including the Gasteig in Munich, Konzerthaus Vienna, Concertgebouw Amsterdam, St. Petersburg’s Philharmonic Hall, Bulgaria Hall Sofia, the Liederhalle Stuttgart, Leiszhall Hamburg and Mariinsky Theater St. Petersburg. In addition, it has performed concert tours in the USA, Europe, and Russia.

The Rastrelli Quartet currently has seven recordings on the Solo Musica, TonArt, Manchester and Genuin labels

Aged six, he started his studies at “The Special Music School for Highly Talented Children” of St. Petersburg State Conservatory, under tutorship of Prof. Mark Reisenstock. He had his public debut at the age of 14 with the Orchestra of St. Petersburg Radio performing The Cello Concerto by A. Khatchaturian in The Grand Concert Hall of St. Petersburg Philharmonic.

He continued his studies with the class tutored by Prof. Anatoly Nikitin at St. Petersburg State Conservatory named after Rimsky-Korsakov, which he graduated with honors in 1994. On graduating, he was the assistant teacher of Prof. Nikitin’s class for four years, as well as being a student of the legendary performer Daniel Schafran.

In 1993, he received the high distinction of representing St. Petersburg Conservatory in Mstislav Rostropovichґs first master-class in Russia after his long exile. As a partaker of a student exchange, he came to Stuttgart, completing his studies with Prof. Peter Buck (Cellist of the “Melos-Quartet”) and graduating as a student laureate. 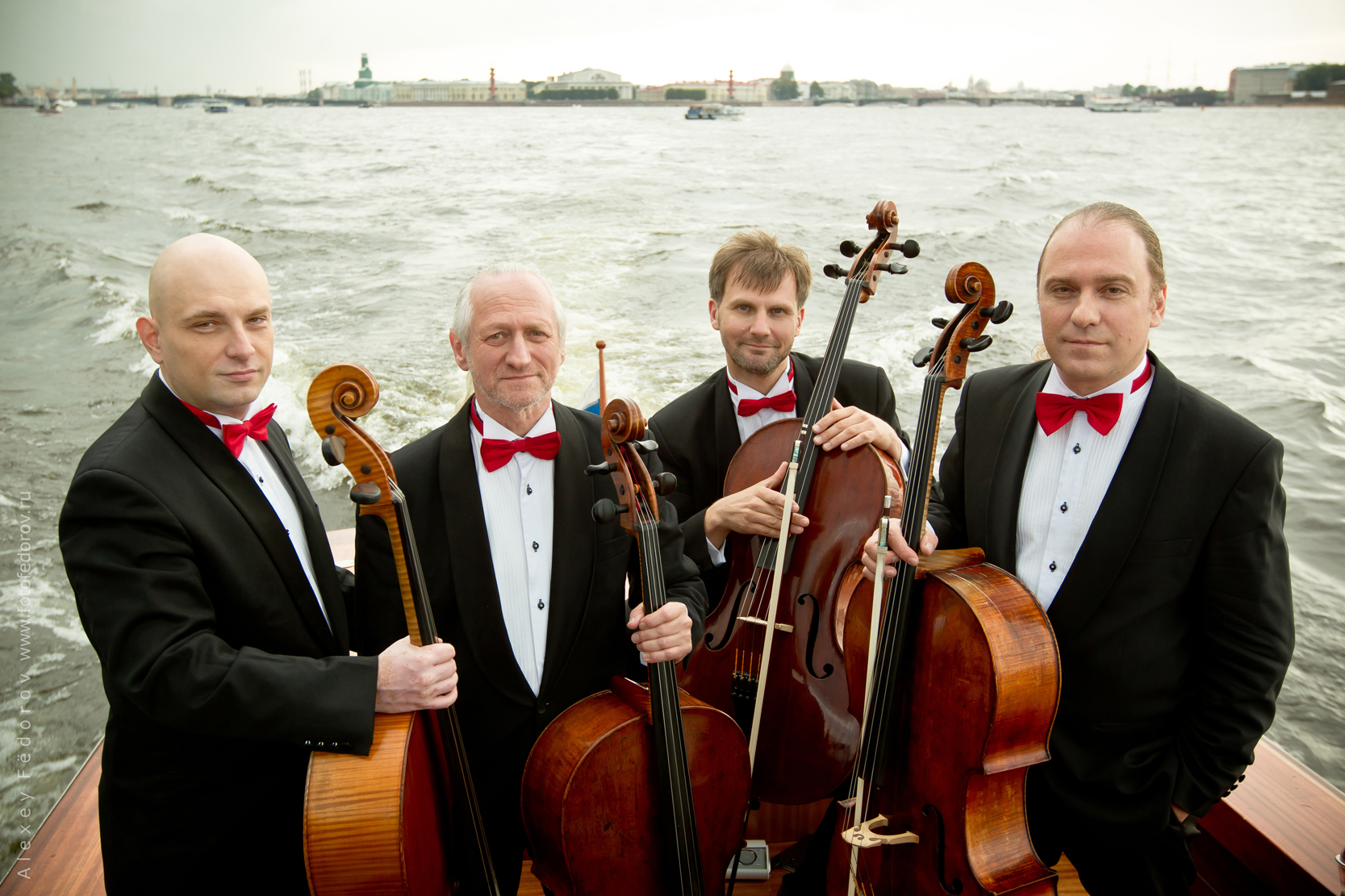 He performed as a soloist in many of the great concert halls.

Studied at St. Petersburg Conservatoire from 1996 to 2001 under professor Anatoly Nikitin and his assistant Kira Kraftzoff.

Studied the play of the original musical instruments under Maria Leonhardt in 1999.Graduated from Music Higher School in Stuttgart under Professor Peter Buck in 2005.

Kirill Timofeev was born in 1978 in St. Petersburg. In 2001 he graduated from the St. Petersburg State Conservatoire, where from 1996 to 2001 he studied music and cello with Prof. Anatoly Nikitin.

During the same period, he studied chamber music with N. Arzumanova as well as basso continuo and ancient music with E. Seredinskaja.

Furthermore, from 2003 to 2005 he studied at the Music College in Stuttgart in the soloists class of Prof. Peter Buck.

In 1997 he was the third laureate of the Pan-Russian Cello Contest in Voronesz, in 1999 he took the first place at the Caltanissetta Chamber Music Contest (Italy) as the cellist of a piano trio.

Kirill Timofeev gained valuable experience in the field of contemporary music by taking part in the various programs of the St. Petersburg institute of modern art “Pro Arte”. He has successfully appeared in chamber ensembles and as a soloist at concerts and festivals in Europe, Russia and USA.

Cellist Sergey (aka Sergio) Drabkin is in charge of the musical arrangements. Sergey Drabkin, born 1953 in Polotsk, Belarus, studied music at the Minsk State Conservatoire.

In 1995 Sergey Drabkin moved to Germany with his family. He now is a full-time member of the renowned Wurtemberg Chamber Orchestra, for which he has written several arrangements. He is also a co-founder of the acclaimed Rastrelli Cello Quartet, which plays exclusively his arrangements, thus contributing to Drabkin’s growing fame as a master of the musical arrangement. (Discography and audio samples: www.rastrelli.de). A long experience of musical arrangements enables Sergey Drabkin to swiftly design and produce high-quality arrangements for all sorts of orchestration.